Redux is awesome! But people often complain about how much boilerplate they have to write when working with it. Part of this problem, is because they feel unproductive defining constants, action creators and big reducers, but also because they don’t have a clear idea on how to organize their project, or even how to proper handle async requests. On this post, we are going to talk about those concerns and present some approaches to handle them.

Arc is a tiny and well tested lib to help you to be productive on your daily work with Redux. It has utilities to abstract the creation of action types, action creators, reducers and it also has an elegant way to manage async requests. It’s also worth mentioning that it has been used for almost a year in production, without regretting a single day!

The process about creating actions

When we are talking about Redux, usually, the first step we take when we are going to create a new feature is: Create action types and action creators.

Let’s say we are creating a Contacts app and the first feature we have to implement is the creation of a contact. The type and the action creator for that would look like this:

The above code is fine, but it’s unlikely that you would have only a creation feature. In a real world, you would have at least a CRUD. So, let’s see the code for that:

The above code is very simple, but as you can see, it feels like we are repeating code. If it feels like that in a Contacts CRUD, imagine in an application with dozen of modules.

If you are familiar with DRY, you know we should avoid code repetition. You may say we are not repeating code, because each creator has it’s own “business logic” and is creating a different kind of action, but I beg to disagree. If you really pay attention, you can see the patterns:

Knowing the first pattern, we could try to normalize our creators, changing them slightly to work with the fixed arguments: payloadand meta.

Let’s take the create action as an example, instead of having name, email and phone as arguments, we could have just the payload:

About the second pattern, the action type could be generated based on the creators name.

Now that we can normalize our creators and we know that the types could be generated based on creator’s name, it’s completely possible to create a factory that given a config it generates the creators and the types for us.

A factory with a simple api generating creators and types would be very handy, right? That is exactly what you have on Arc’s createActions:

Click on “run” to see the output generated from createActions

The function createActions expects a namespace as its first argument and an action definition object as the second.

For the action definition object, each key should be the creator name and each value could be either, an object with the defaults for payload, meta and error or null if you don’t want any defaults.

The result will be an object, containing the creators and the types for each action.

The types from the above config, would look just like the following:

Notice: the namespace we provided in the config, was used to prefix the action types value, in order to avoid having two different actions with the same name in the application.

Based on the above object, wherever you would like to use the type CREATE, you could just import the types object and use it such as below:

Based on our CRUD config, the creators object would be similar to this:

Creators creates the actions using the payload, meta and error arguments. They are all optionals, so, you can omit them as you like.

Take a look at how we would use our create creator:

The creators only generates the actions, so, whenever you want to dispatch an action, you have to use it combined with the dispatch method from Redux store, as we are going to see below.

Using Action Creators in the components

The most common place we use creators is inside a component connected to the store.

There’s no secret when you have to use a creators generated by arc inside a component. Take a look at the example:

As you can see in the above example, we just defined a create method inside mapDispatchToProps, to have access to dispatch method. Then, inside our component we would have access to create through the props.

As you already know, we are going to reuse the generated types inside our reducers. But, that are also other bits we have to discuss about reducers.

Redux calls all the application reducers when we dispatch an action, then, inside the reducers we have to check if the dispatched action means something to the given reducer or not.

I’ve seen many people using switch cases to handle that situation, where you match the action type with your case and you can use default case to return the previous state. The problem is that switch cases doesn’t scale very well, and you can end up with painful code to maintain.

I have seen also many people using multiple IFs, including me, but this approach has similar issues with the switch case’s approach.

With both approaches, you end up dealing with matching logic and state changes in the same place. That way is hard to focus in a small piece of code per time.

Thinking about that, we created a createReducers function in Arc, which accepts an initial state and a handlers object which the keys are the action types and the values are handlers for each action. Take a look at the example below:

The main idea about this approach, is having a handler for each kind of action. That way you can focus in a small chunk of code per time, instead of a function with 100 lines. It also has a better performance in comparison to IFs and switch cases, as it uses short circuit verification. Under the hood its code is similar to the following:

As you can see, there’s no magic in the code, all we are doing is verifying if there’s a handler to the given action. If we do, we just call it providing the state and the action, if we don’t, we just return the previous state. The difference is that you have this abstracted and tested for you, with validation as a bonus, to reduce your debugging time in case you provide an invalid action type or an invalid handler: 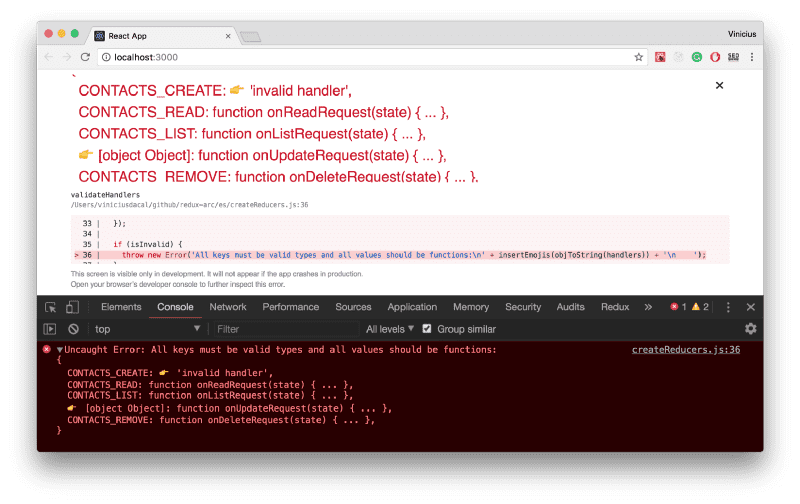 Arc has also a good support to help you handle async requests as it was originally designed to do just that. I plan to explore this topic in another post, but if you are interest on this, take a look at the docs to see how you can use it: redux-arc.js.org/#async-actions.

Besides reducing boilerplate and allowing you to split your code elegantly, createReducers as well as createActions is all about configuration over programmatically implementation. That allows us to run validations to help you with debugging and also allows you to focus on what really meters.

You don’t want to spend time writing boilerplate or debugging your whole application just because you commit a typo.

You want to implement features and fix bugs as better and faster as it’s possible, without loose flexibility and we want to help you do that!

Any feedbacks and contributions are very welcome. Feel free to open an issue on github to ask me more about it.

Did you enjoy the read?

️❤️ Help us spread the word by giving a like and sharing️️️️ ❤️

🖖 Don’t forget to follow me, to be notified about future posts! 🖖